The MH17 tragedy has united five countries within the Joint Investigation Team (JIT), consisting of Ukraine, the Netherlands, Australia, Belgium, and Malaysia.

On Wednesday, June 19, 2019 in the Dutch city of Nieuwegein, the JIT began its investigation into the MH17 tragedy and publicly named those involved in the operation of the missile system that shot down the Malaysia Airlines aircraft on July 17, 2014 near the town of Torez in Ukraine’s region of Donetsk.

THE ANTICIPATION OF JUSTICE

Previously in 2016, the JIT evaluated the details of the MH17 case in Nieuwegein where they also announced the preliminary results of the investigation.

Relatives of the MH17 flight victims have awaited progress in the investigation for five years. Silene Fredriksz, mother of 23-year-old Bryce Fredriksz, lost her son to the MH17 tragedy on July 17, 2014, as well as his girlfriend, Daisy Oehlers. The tragedy claimed the lives of a total 283 passengers and 15 flight crew members. Fredriksz does not anticipate confronting those responsible in court, however, she demands for the silencing of the Russian media propaganda that claims the evaluations of the JIT are false. “I get angry every time I see fake news,” Fredriksz told journalists. She further commented, “This is only the start. There will be more people who will be prosecuted.” 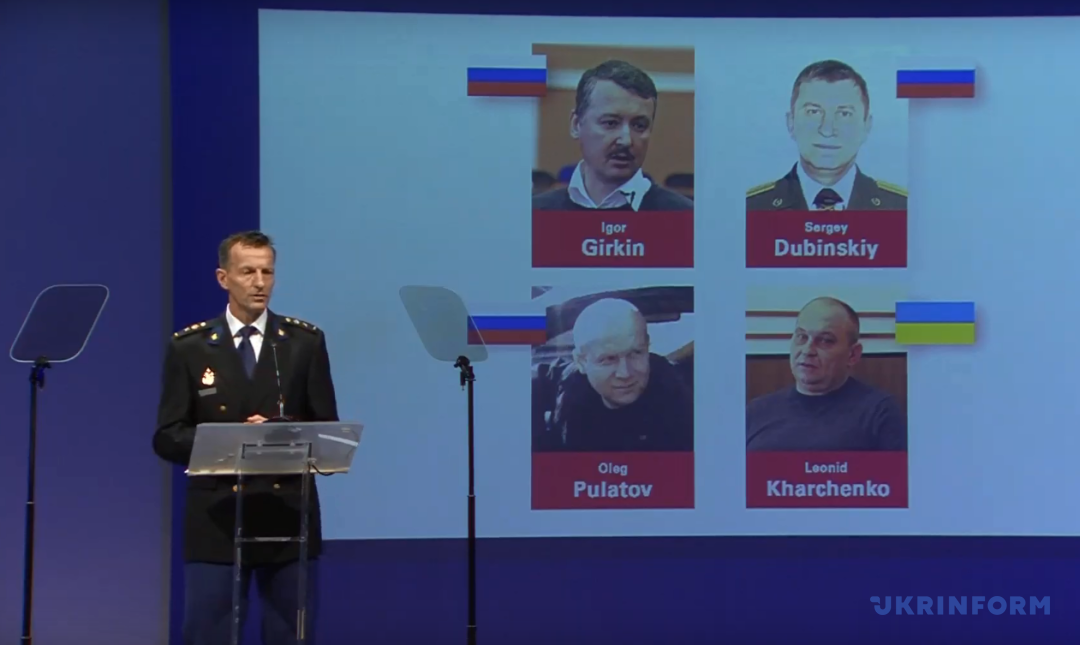 Sergey Dubinskiy - colonel of the Main Intelligence Directorate of the General Staff of the Russain Armed Forces, is considered to be the lead organizer of the anti-aircraft combat operation. Colonel Dubinskiy is the lead official of the “Main Intelligence Department of the Donetsk People’s Republic (DPR)."

Oleg Pulatov - lieutenant colonel of the Russian Airborne Forces Reserve, was responsible for the transportation of the missile launcher system and maintained Russian occupied security of the crash site.

Leonid Kharchenko - a Ukrainian civilian, was the “Field Commander” of the DPR and remains in the occupied Donbas territory.

TIES TO THE KREMLIN

Russian journalists attend JIT press conference and record the developments of the investigation.

Russian media maintains its stance of denial and continues to place blame on Ukraine, claiming that Ukrainian media is producing fake news. Perpetrators Girkin and Dubinskiy have reportedly claimed that they are not guilty and do not plan to attend a trial. Although no one demands the extradition of the suspects, the investigation office requests online access to them. An interim investigation office will operate in Kyiv to provide the opportunity for witness testimony and other legal proceedings.

Prior to the press conference, Dutch media presented five potential perpetrators in the attack on the Boeing aircraft. Two were accurate - Sergey Dubinskiy and Oleg Pulatov. The other three potentials included Sergei Muchkayev, Alexander Borodai, and Ivan Bezyazykov. Muchkayev is the former commander of the 53rd Anti-Aircraft Brigade; Borodai is the former "Prime Minister of the Donetsk People’s Republic"; and Bezyazykov is a former Ukrainian serviceman who is currently on trial in Ukraine for charges of high treason. Although the JIT did not announce their names at the press conference, it is anticipated that a more clear connection between them and the incident is upcoming.

Muchkayev did not cooperate with the inquiries of Dutch journalists, however, Borodai participated in an interview with Dutch RTL news. He is reportedly not concerned with his status as a suspect and does not respect the litigation process regarding the MH17 tragedy. “I do not feel responsibility,” Borodai said. Borodai says that he resigned from his post prior to the incident and that the evidence against him is false.

International support is unified as numerous countries demand justice and call on Russian leadership to provide transparency in the justice process.

U.S. Secretary of State Michael Pompeo in his statement called on Russia "to respect and adhere to UN Security Council Resolution 2166 (2014) and ensure that any indicted individuals currently in Russia face justice."

U.S. Special Representative for Ukraine Negotiations Kurt Volker called on Russia to cease its lies surrounding the shooting down of MH17 and stop its callous disinformation campaign.

NATO Secretary General Jens Stoltenberg, said, "This is an important milestone in the efforts to uncover the full truth and ensure that justice is done for the killing of 298 people from 17 countries."

Canada also supported the results of the investigation. Canadian Foreign Minister Chrystia Freeland recalled that Canada condemns this horrible act that killed 298 people, including one Canadian.

First Deputy Prosecutor General of Ukraine, Dmytro Storozhuk, commented, "This is the first step, and this does not mean that there will be no other surnames appearing in independent journalistic investigations.” Storozhuk further commented that the success of the investigation will depend on the unity of the world community and the respective sanctions that can be applied to Russia in response.