Volodymyr Zelensky has been sworn in as Ukrainian president in the Verkhovna Rada.

After my election victory, my six-year-old son said: «Dad, they say on TV that Zelensky is the President … So, it means that…I am... the President too?!»

At the time, it sounded funny, but later I realized that it was true.

Because each of us is the President.

Not just the 73 percent who voted for me, but all 100 percent of Ukrainians.

This is not just mine, this is our common victory.

And this is our common chance that we are responsible for together.

It hasn’t been only me who has just taken the oath. Each of us has just put his hand on the Constitution and swore allegiance to Ukraine.

Now, imagine the headlines: «The President Does Not Pay Taxes,» «The Intoxicated President Ran the Red Light» or « The President Is Quietly Stealing Because Everyone Does.» Would you agree that it’s shameful?

This is what I mean when I say that each of us is the President. From now on, each of us is responsible for the country that we leave to our children.

Each of us, in his place, can do everything for the prosperity of Ukraine.

Our European country begins with each one of us.

We have chosen a path to Europe, but Europe is not somewhere out there. Europe is here (in the head — Ed.) And after it appears here, it will be everywhere, all over Ukraine.

This is our common dream.

But we also share a common pain. Each of us has died in the Donbas. Every day we lose each one of us. And each of us is an internally displaced person — the one who has lost his own home and the one who has opened the door of his home, sharing the pain.

And each of us is a migrant worker — the one who could’t find himself at home, but has found income in a foreign country, and the one who struggling with poverty, is forced to lose his own dignity.

But we will overcome all of this! Because each of us is a Ukrainian.

We are all Ukrainians: there are no bigger or lesser, or correct or incorrect Ukrainians. From Uzhgorod to Luhansk, from Chernigiv to Simferopol, in Lviv, Kharkiv, Donetsk, Dnipro and Odesa — we are Ukrainians. And we have to be one.  After all, only then we are strong.

Ukrainians in Europe and Asia, in North and South America, Australia and Africa — I appeal to all Ukrainians on the planet!

We really need you. To all who are ready to build a new, strong and successful Ukraine, I will gladly grant Ukrainian citizenship. You must come to Ukraine not to visit, but to return home. We are waiting for you. There is no need to bring souvenirs from abroad, but please, bring your knowledge, experience and values.

That will help us start a new era.

Skeptics will say that it is impossible, a fantasy. But what if this is, in fact, our national idea — to unite and make the impossible against all odds?

Remember the Iceland soccer team at the European Championship — when a dentist, a director, a pilot, a student and a cleaner defended their country’s honor? No one believed they could do it, but the did it!

And this should be precisely our path. We must become the Icelanders in soccer, the Israelis — in the defense of their native land, the Japanese — in technology and the Swiss — in the ability to live with each other in harmony, despite all the differences.

History is unfair. We are not the ones who have started this war. But we are the ones who have to finish it. And we are ready for dialogue. I believe that the perfect first step in this dialogue will be the return of all Ukrainian prisoners.

Our next challenge is returning the lost territories. In all honesty, this wording does not seem entirely correct to me because it is impossible to return what has always been ours. Both Crimea and Donbas have been our Ukrainian land, but the land where we have lost the most important thing — the people.

Today we have to return their minds — that’s what we have lost. Over the years, the authorities have not done anything to make them feel Ukrainians and understand that they are not strangers, but they are our people, they are Ukrainians.  And even if they are granted 10 different passports, it won’t change anything. For being Ukrainian is not a line in the passport — being Ukrainian is here (in the heart — Ed.)

I know that for sure. I know that from the soldiers who are now defending Ukraine, our heroes, some of whom are Ukrainian-speakers, while others — Russian-speakers. There, in the frontline, there is no strife and discord, there is only courage and honor. So, I want to appeal to our defenders now:

There can be no strong army in a place where the authorities do not respect the people who every day sacrifice their life for the country. I will do everything I can to make you feel respect. This means decent, and most importantly, secure salaries, living conditions, vocation leaves after the combat missions and your and your families’ holidays. We must not just talk about NATO standards — we must create those standards.

Of course, besides the war, there are many other problems that trouble Ukrainians. Among them are the shocking utility tariffs, humiliating wages and pensions, painful prices and non-existent jobs. There is also the health care that is seen as improving mostly by those who have never been to a regular hospital with their child. And then, there are also the mythical Ukrainian roads that are being built and repaired only in someone's prolific imagination.

Allow me to quote one American actor who has become a great American president: «Government is not the solution to our problem, government is the problem.»

I do not understand our government that only shrugs and says: «There is nothing we can do.»  Not true. You can. You can take a sheet of paper and a pen and free your seats for those who think about the next generations and not about the next election! Do it and people will appreciate that.

Your applause is pretty light…I guess not everyone likes what I’m saying? Too bad, since it’s not me, but the Ukrainian people who is saying that.

My election proves that our citizens are tired of the experienced, pompous system politicians who over the 28 years, have created a country of opportunities — the opportunities to bribe, steal and pluck the resources.

We will build the country of other opportunities — the one where all are equal before the law and where all the rules are honest and transparent, the same for everyone. And for that, we need people in power who will serve the people. This is why I really do not want my pictures in your offices, for the President is not an icon, an idol or a portrait. Hang your kids' photos instead, and look at them each time you are making a decision.

I can go on, but Ukrainians want actions, not words. So, dear deputies!

You have appointed the inauguration on Monday, a workday, which has one benefit -— it means you are ready to work.

Therefore, I ask that you approve:

1. The law on removing parliamentary immunity.

3. The long-awaited Electoral Code and open-lists.

1. Head of the Security Service of Ukraine.

3. Minister of Defense of Ukraine.

This is certainly not all that you could do, but for now, it will suffice.

You will have two months to do that. Do it. And take all the medals for it — not a bad move before the snap parliamentary election.

I am dissolving the Verkhovna Rada of the eighth convocation. 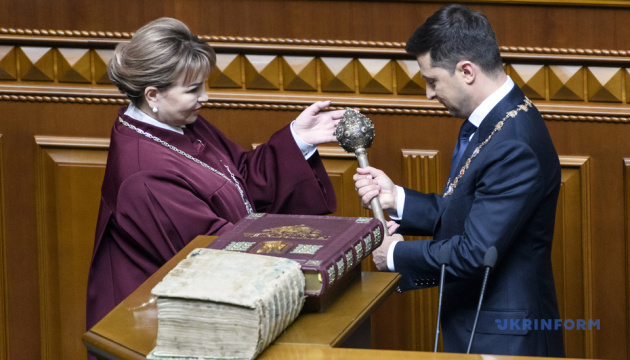 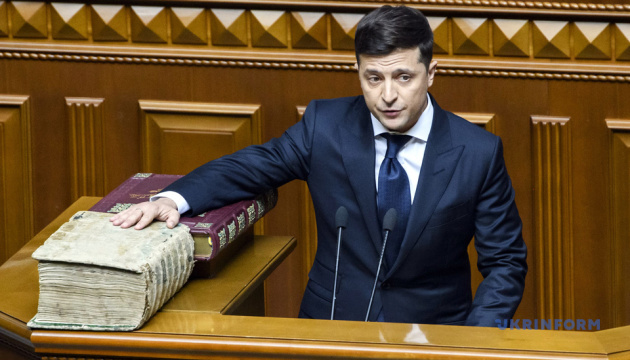 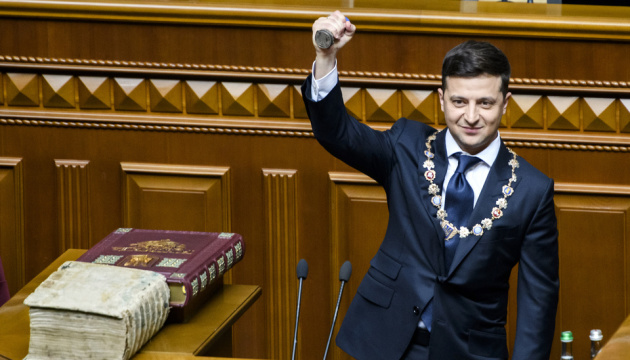 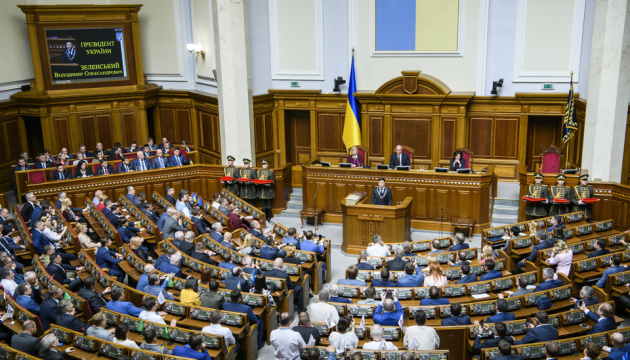 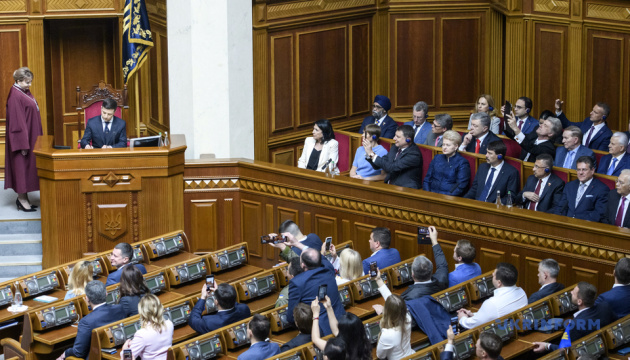 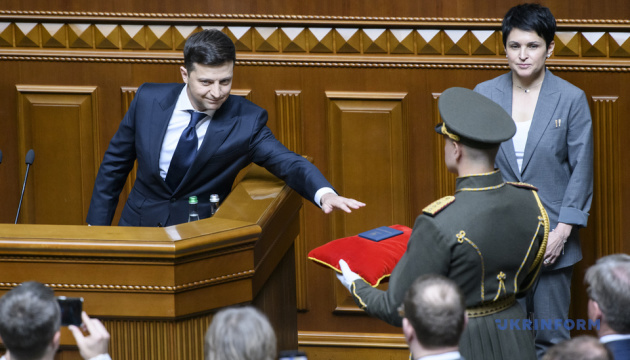 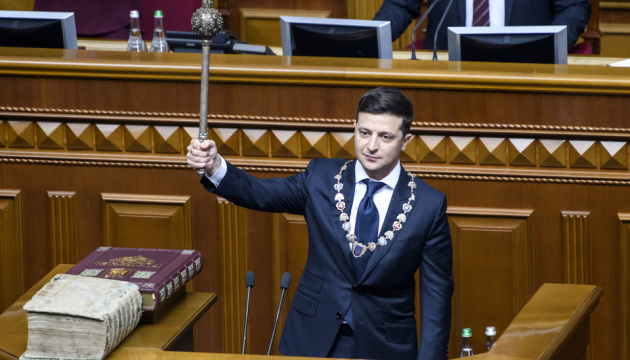 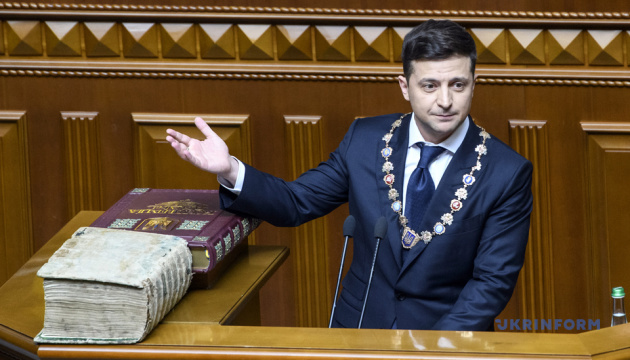 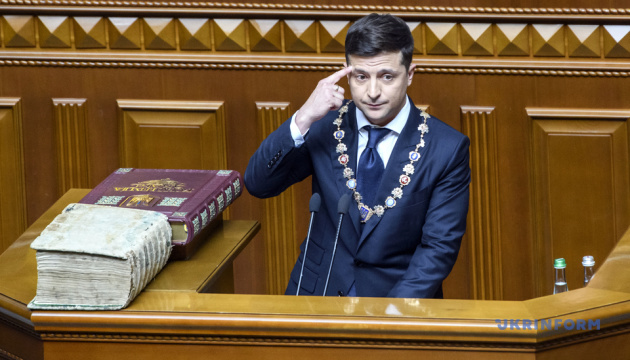 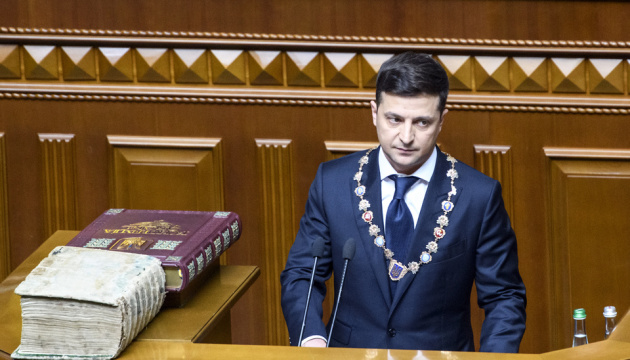 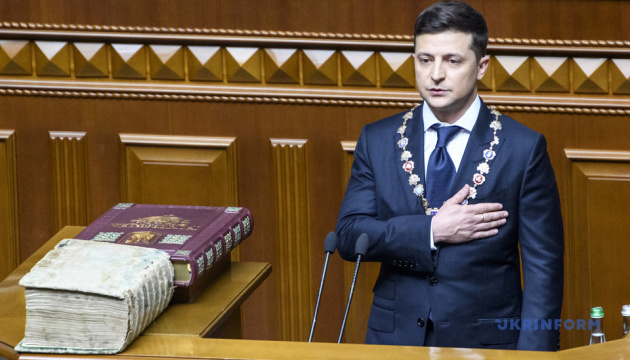 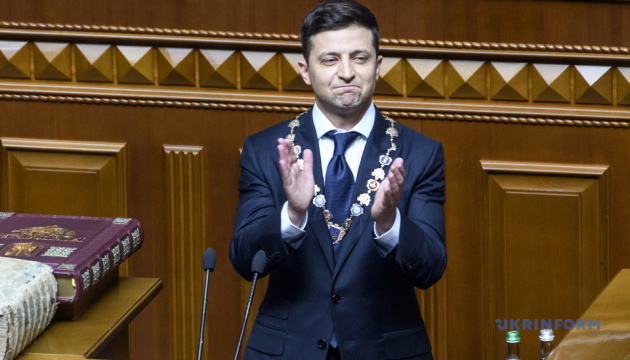 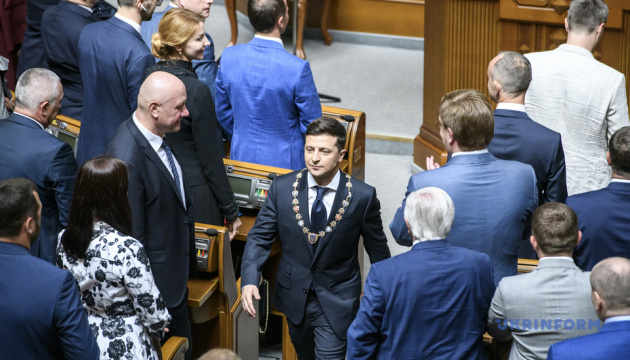 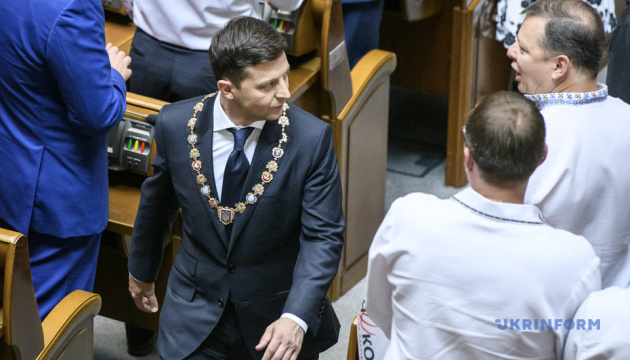 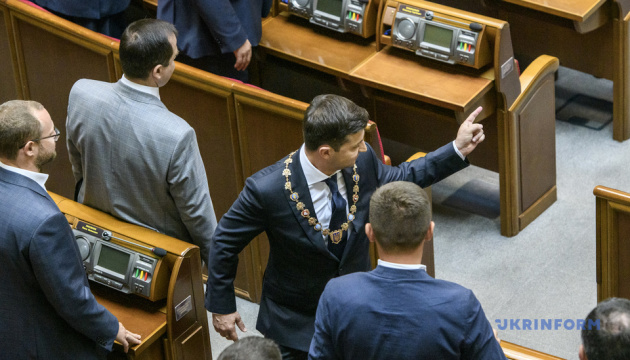