Five captured Russian conscripts apologize to Ukrainians and say they were deceived.

The captives made a corresponding statement at a briefing, an Ukrinform correspondent reports.

"Today we have gathered with fellow conscripts to tell the whole truth about what is happening here, to tell the whole country about the war in Ukraine. On February 24, 2021, we invaded the territory of Ukraine. We were told till the last minute that it would be just drills in the territory of Russia, in the fields. But as a result, we were deceived," said Alexander Morozov (born in 2000, private first class, driver-mechanic of infantry fighting vehicle, born and residing in Moscow, called up for military service on June 21, 2021). 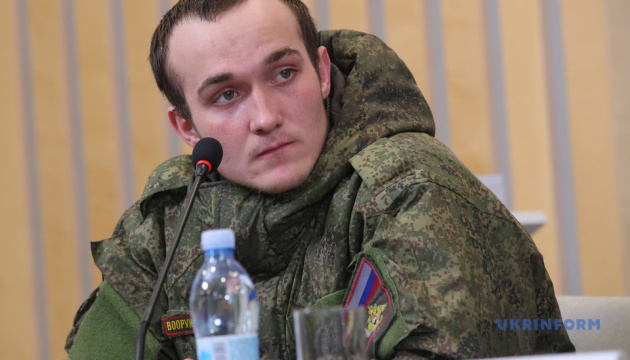 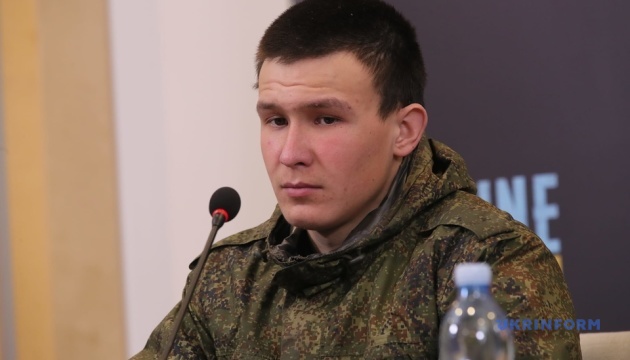 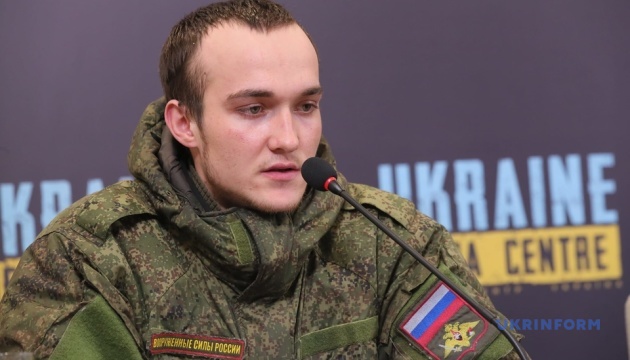 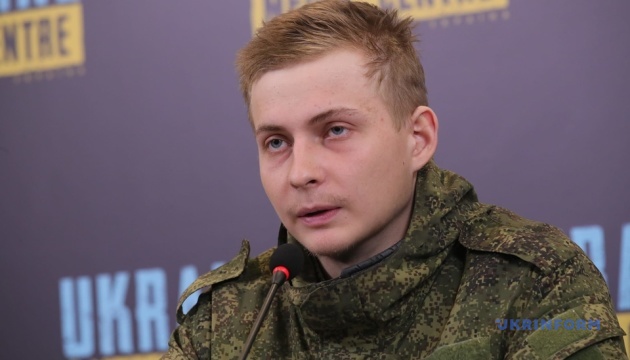 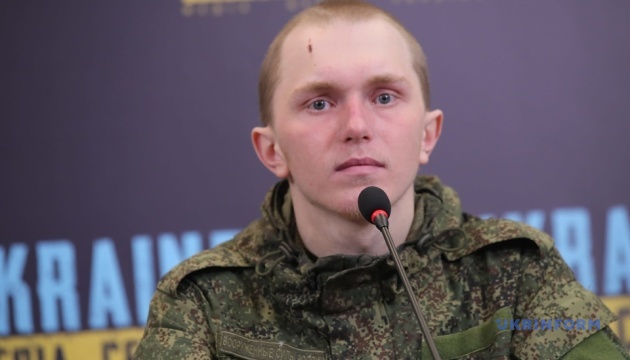 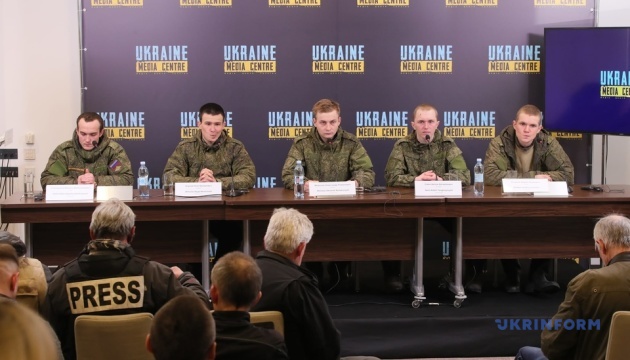 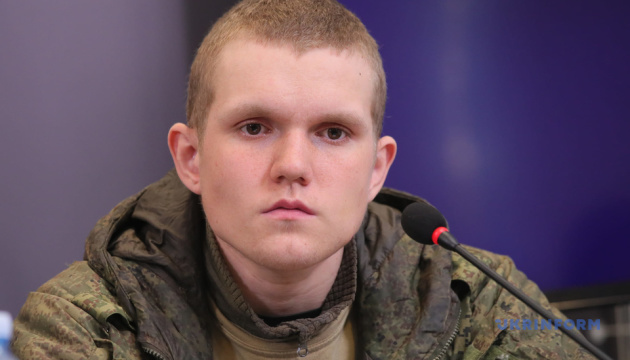 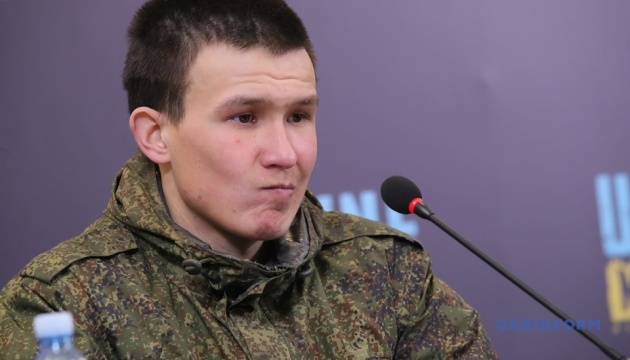 “When we entered the territory of Ukraine, we reached the town of Romny, our task was to set up a checkpoint and just inspect the vehicles… We were taken prisoner near the city of Sumy. I thought that we would be beaten, humiliated, given no food or water in captivity. As a result, it turned out the opposite: we were given food, water, we had a place to sleep, we were given warm clothes," he said.

Morozov said they were given rations in the fields that were expired for years, and "that was disgusting"; the equipment was breaking down all the time while they were driving towards Romny.

"Ukrainians are a strong people, they fight like beasts. Their aircraft shatters our columns utterly. Our side suffers great losses: technicians, sergeants, officers, soldiers. And we want to stop that. We want to tell the whole world the truth about what is happening here. People are dying here, children and elderly are dying here just for nothing, because of some Putin who is lying, who told the whole world that there were no conscripts here. But here we are – five conscripts who just want to return home. And I want to apologize to the whole of Ukraine for coming here. I do not want violence in this country. I am very ashamed," Morozov said.

Nikolay Polshchykov (born in 2001, private first class, driver-mechanic of infantry fighting vehicle, born in Voronezh region, lives in Ryazan region, called up for military service on June 30, 2021) said that after two months of service in the regiment they were sent to drills which took place in the Kursk and Belgorod regions. At the end of the exercises, military equipment was marked and the officer said that the equipment was being prepared for combat operations.

"We didn't believe in that as conscripts are not sent to war ... And on February 24 we found ourselves on the territory of Ukraine, near the town of Romny. We came under fire, I was wounded and I saw many people killed, many wounded. There were more than 150 conscripts in my battalion," he said.

He also said that he envied the people who had managed to buy their way out of this war by bribing the command to stay in Russia. According to him, it was very easy even to buy a military registration card which costs RUB 80,000.

"I want to appeal to the citizens of my country, to parents whose sons are serving and whose children are going to serve. Do not send them here because very terrible things are happening here you are unaware of … Here the Armed Forces of Ukraine are trying to protect their country. We broke into their house like fascists. Not knowing the purpose, tasks. We are just being killed. Our aircraft and artillery bomb peaceful cities. I apologize to the people of Ukraine for breaking into your house," he said.

He also believes that the only thing he can die from here is from the strikes of Russian planes.

Andrey Savin (born in 2002, lives in Perm Krai, the town of Solikamsk, called up for military service on June 22, 2022) also said that his tank regiment was allegedly sent to the exercises. Then soldiers were deprived of their phones and informed that they would "go to Ukraine to carry out a combat mission to capture the city of Kyiv and to free the civilian population of Ukraine from the so-called Bandera followers and neo-Nazis," and that they would receive a monetary reward after the operation.

"We did not have the opportunity to escape from there, we were put in tanks… And on the morning of February 24, we were already in the territory of Ukraine… In a few days, we ran out of food. Our equipment was breaking on the way. There were only 6 tanks left from 30 and 2 armored personnel carriers," he said.

In turn, Niyaz Akhunov (born in 2002, has been serving in the army since June 21, 2021) said that after they had been taken prisoner, it was scary at first, but they were immediately fed, given medicines, changed clothes, treated fine.

"This is a senseless war in which we were thrown – conscripts who have not seen real hostilities… I would like to apologize to all the Ukrainian people for crossing the border with Ukraine, coming with weapons to you, bombing your cities," he added.

Another prisoner of war, Andrey Pozdeyev (born in 2003, born and residing in Irkutsk region, called up for military service on June 23, 2021) said that on February 23 they were told that they would conduct a training march through Russia.

"We were told: 'Don't be afraid, no one will take you to Ukraine', as rumors were going, someone guessed that equipment was being prepared, many were talking about the war… On the night of February 23-24, we left. There was a morning line-up, and we were told: ‘For those who did not understand, you are in the territory of Ukraine.’ And all the statements by Vladimir Putin that there are no conscripts in his military operation are lies," the prisoner of war stressed.